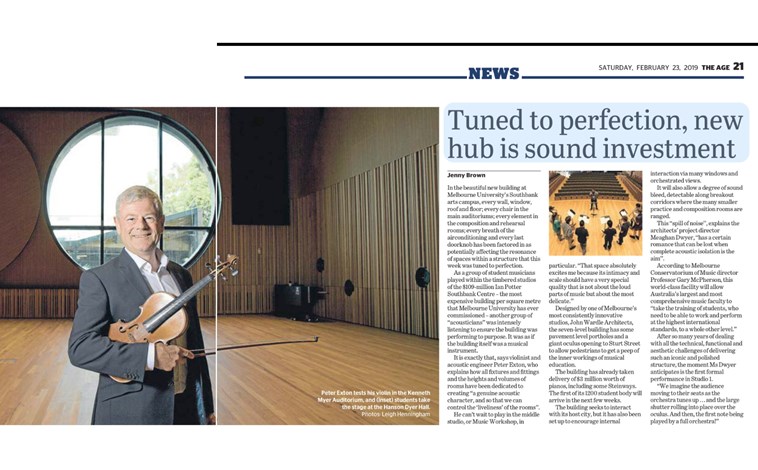 It is a great pleasure to share this article which appeared in The Age on February 23, 2019. Marshall Day’s Peter Exton (pictured) discusses the acoustic design of the Ian Potter Southbank Centre, the new home of the Melbourne Conservatorium of Music.

This article is from the February 23 issue of The Age Digital Edition, by Jenny Brown

In the beautiful new building at Melbourne University’s Southbank arts campus, every wall, window, roof and floor; every chair in the main auditoriums; every element in the composition and rehearsal rooms; every breath of the airconditioning and every last doorknob has been factored in as potentially affecting the resonance of spaces within a structure that this week was tuned to perfection.

As a group of student musicians played within the timbered studios of the $109-million Ian Potter Southbank Centre – the most expensive building per square metre that Melbourne University has ever commissioned – another group of ‘‘ acousticians’ ’ was intensely listening to ensure the building was performing to purpose. It was as if the building itself was a musical instrument

It is exactly that, says violinist and acoustic engineer Peter Exton, who explains how all fixtures and fittings and the heights and volumes of rooms have been dedicated to creating ‘‘ a genuine acoustic character, and so that we can control the ‘liveliness’ of the rooms’’ .

He can’t wait to play in the middle studio, or Music Workshop, in particular. ‘‘ That space absolutely excites me because its intimacy and scale should have a very special quality that is not about the loud parts of music but about the most delicate.’’

Designed by one of Melbourne’s most consistently innovative studios, John Wardle Architects, the seven-level building has some pavement level portholes and a giant oculus opening to Sturt Street to allow pedestrians to get a peep of the inner workings of musical education.

The building has already taken delivery of $3 million worth of pianos, including some Steinways. The first of its 1200 student body will arrive in the next few weeks.

The building seeks to interact with its host city, but it has also been set up to encourage internal interaction via many windows and orchestrated views.

It will also allow a degree of sound bleed, detectable along breakout corridors where the many smaller practice and composition rooms are ranged.

This ‘‘ spill of noise’’ , explains the architects’ project director Meaghan Dwyer, ‘‘ has a certain romance that can be lost when complete acoustic isolation is the aim’’ .

According to Melbourne Conservatorium of Music director Professor Gary McPherson, this world-class facility will allow Australia’s largest and most comprehensive music faculty to ‘‘ take the training of students, who need to be able to work and perform at the highest international standards, to a whole other level.’’

After so many years of dealing with all the technical, functional and aesthetic challenges of delivering such an iconic and polished structure, the moment Ms Dwyer anticipates is the first formal performance in Studio 1.

‘‘ We imagine the audience moving to their seats as the orchestra tunes up ... and the large shutter rolling into place over the oculus. And then, the first note being played by a full orchestra!’’ 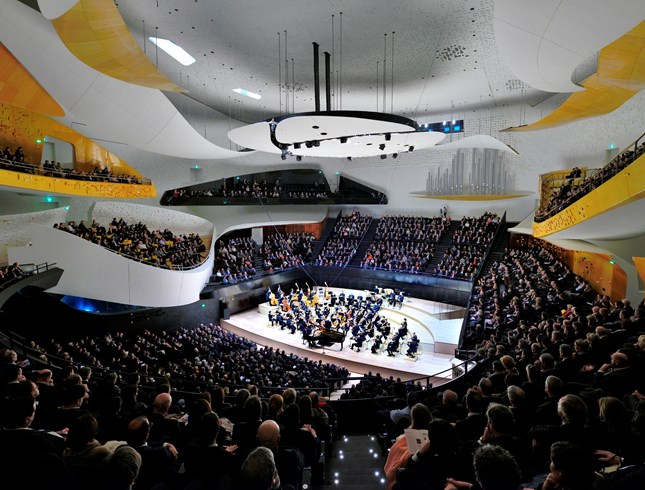 Video presentation on the acoustic design of the Philharmonie de Paris